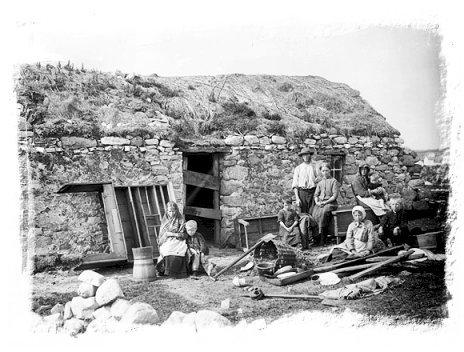 About Landlordism in Gweedore

Up until the 19th century, the population of the parish remained low and it's thought that a good relationship existed between the locals and the owners of the land.

It was with the advent of the new Landlords in the 19th century, and in particular Lord George Hill (1801 -1879) and his son Arthur, that the relationship deteriorated and with it inevitably the lives of the local people.

The local community under the influence of Father James McFadden (parish priest 1875 - 1901),

were able to challenge the Landlords with the founding of the Land Commission (1881).

The Land War in Gweedore climaxed with the killing of the District Inspector William Martin or marú an Mhairtínigh as it's known locally. This took place on Sunday the 3rd of February 1889 outside St. Mary's chapel and is considered one of the most important events in the history of the parish.