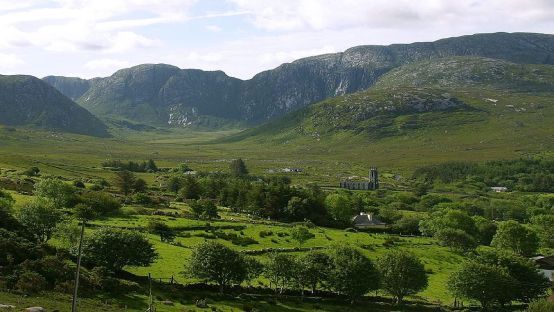 Get Directions
View All 15 Images

About The Poison Glen

Located at the foot of Errigal amongst the Derryveagh Mountains, the Poison Glen is one of the most stunning locations in a county noted for it's natural beauty.

The origin of the name has been the subject of much discussion over the years with many different explanations given.

One story is that the name comes from a poisonous plant (Spurge) that grows in the Glen and was responsible for the deaths of a squad of English soldiers that had set up camp in the Glen.

Another more popular story is that the Glen received it's name from Balor of the Evil Eye, the one-eyed Chieftain who lived on Tory Island. It's thought that Balor was killed by a rival chieftain in the Glen with a spear through his eye. The blood poured from Balors eye turning the Glen red and splitting the great stone Cloch Hatán in 3 parts. The stone can be seen to this day and is only a short 10 minute walk into the Glen.

Perhaps the likeliest story however is that the name came from a simple mistake made by the first English cartographers in the area. The Gaeilge words for Poison & Heavenly are very similar & it's thought that an oversight was made with the spelling. Whether true or not, nowhere would be more deserving of the name 'The Heavenly Glen'.