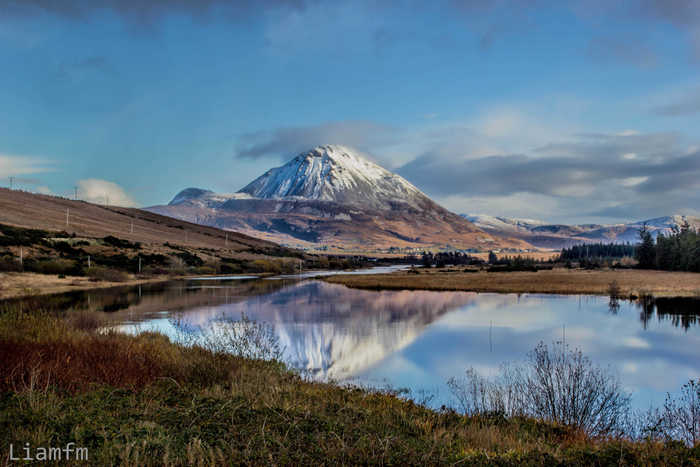 The Clady River flows through wild moorland for around 5 miles draining Lough Nacung at Gweedore and flowing through Bunbeg to join the Crolly River estuary. Access to the river is relatively easy although the banks are fairly rough. Water is taken from the head of the Clady and channeled to a hydroelectric power station at the mouth of the River Crolly. This means the natural flow of the river has been affected and water is let down the Crolly in 24 freshets between May and September. Angling is most productive after these artificial floods, as with a spate river, and indeed 8 or 9 salmon in a day is not uncommon.

The Clady gets a good run of grilse with the odd autumn salmon. The river flow is controlled by a hydroelectric power station at the head of the river. A total of 18 freshets are let down the river each season to assist fish in ascending the river in addition to the output of the station. The best of the run occurs at the end of June and July (often when the power station lets freshes down the river). There is also a run of sea trout, which is at its highest at the end of August and though not large, is improving. Most sea trout are caught in the evening, downstream of Bunbeg Bridge.

The fishery occupies the bottom 3½ miles of the river. Angling is not allowed between the dam and the bridge. Angling methods vary. In the stretches closer to the mouth of the river, spinning and worming is popular. In the higher stretches fly-fishing is more popular. Useful flies include Ally’s shrimp, Badger, Curry’s Red shrimp, but any of the most popular shrimp flies should fish well.

The Crolly River or Gweedore River drains Lough Anure running around 3 miles through Crolly to the sea. It is a fairly narrow, stony spate river, flowing through rocky gorges and deep pools. The countryside about the river is very wild and scenic. The Crolly gets a better run of spring fish than the Clady and these are entering the river in March, April and May. There is also a run of autumn salmon. The grilse enter the river from early June, peaking in late June/early July. It is possible to catch up to 8 fish a day when conditions are right. Access to the river is relatively easy although the banks are fairly uneven. There are some good pools from ‘The Flag’ downstream to the Crolly factory and a further three good pools between the Crolly Bridge and the sea.

The sea trout show a preference for the Crolly giving it a better run of sea trout than the Clady. Late June and July sees the best run of sea trout. The last number of seasons saw a marked increase in sea trout catches with many fish in the 1½ to 2lb bracket.

The rivers have fished well for the last few seasons. The reported catch returns usually average around 500 salmon each season.

Lough Anure drains into the sea through the River Crolly (Gweedore River) it is a big shallow lough of 360 acres. This beautiful lough has a good head of free rising brown trout which average ½lb with many up to 1lb. It also gets a good run of sea trout and salmon from mid-July. The lough is shallow and rocky and care should be taken especially in a big wave.

These are available from:

Boat hire for Lough Anure is available through:

A is boat available for hire on Lough Nacung. This is €25 per day (no engine)